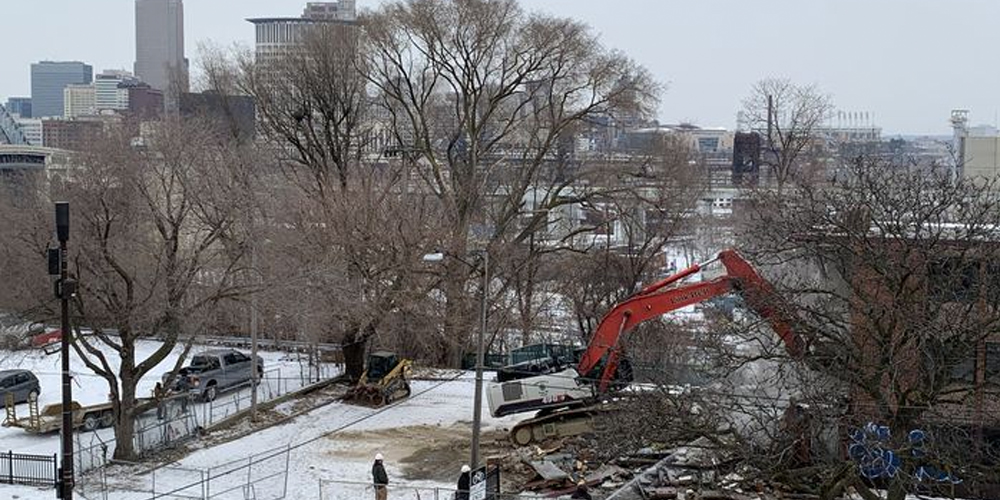 To read the full version of this article, please visit Cleveland.com

CLEVELAND, Ohio — The ground shook. Debris rained down as the sharp teeth of an excavator bucket chewed at the concrete innards of a three-story, brick-faced building. A man in heavy work clothes and a hard hat sprayed water from a hose to keep the dust down.

That was the scene Monday as contractors began tearing down the former Cuyahoga Metropolitan Housing Authority “Big 8′’ apartment complex on West 25th Street in Ohio City, a block south of Detroit Avenue.

After more than a decade of planning, dreaming, designing, and grant-writing, the demolition marked the first highly visible step toward the creation of a 23-acre park at Irishtown Bend overlooking the Cuyahoga River and the downtown skyline.

Every bite of the excavator’s bucket opened up a bit more of the view.

Once the site of a 19th-century Irish immigrant settlement, Irishtown Bend is a sodden, unstable, weed-covered slope on the outer curve of the Cuyahoga River opposite Columbus Road Peninsula, with a few buildings on top, along West 25th Street.

For decades, the hillside has threatened to avalanche into the river, an event that could rupture a major sewer line and block ore boats from reaching steel mills upstream.

The Port of Cleveland, Cleveland Metroparks, LAND Studio, Ohio City Inc., the City of Cleveland and other nonprofit organizations and government agencies have joined forces to stabilize the slope, rebuild waterside bulkheads, and create a park with trails zig-zagging down to the water.

Other partners include the Northeast Ohio Areawide Coordinating Agency (NOACA),

“It’s a pretty monumental day,’’ said Tom McNair executive director of Ohio City Inc. “It’s an odd thing in our business where you literally spend years working making things happen. To reach a point where you can see actual, tangible progress on a project is pretty incredible.”

McNair and other advocates have long described the Irishtown project as a gigantic two-fer, with numerous benefits to communities and businesses.

Safeguarding the slope would protect a $3.5-billion shipping industry that serves 20,000 jobs in the region, according to information attributed to the Port of Cleveland on LAND Studio’s website.