The public is invited to a groundbreaking scheduled June 2 for the long-awaited 1.7-mile Hemlock Creek Trail, which will directly connect Independence and the region’s urban green space lovers with the Ohio & Erie Canal Towpath Trail, Cuyahoga Valley National Park (CVNP), and an extensive system of paved and nature trails that wind throughout the Cuyahoga Valley and Cleveland Metroparks West Creek Reservation.

The June 2 event is scheduled for 10 a.m. at 6801 Brecksville Road behind the Cleveland Clinic Business Operations Center across from City Hall.

“Of all the community connections to the National Park’s amenities that we are fortunate to have within Independence, the Hemlock Creek Trail will be the most extensive,” said Mayor Anthony L. Togliatti. “Completion of the trail will ensure our residents, the ever-expanding daily workforce and visitors can enjoy safe access to some of the most treasured natural assets in Northeast Ohio.”

The majority of the multiuse asphalt path will be constructed along abandoned Hemlock Road/Stone Road right-of-way and former quarry haul roads along Hemlock Creek, through the Cuyahoga River Valley and inside of CVNP. The Towpath will be the trail’s eastern terminus and the western terminus will be at Brecksville Road and Selig Drive in Independence. Five bridges are also part of the project plan. Some of the land is owned by the City, which had early industrial roots in stone quarrying, the rest is owned by CVNP and the Cleveland-Cuyahoga County Port Authority/Cumberland Real Estate Development.

“Completing this project has been a key element of the West Creek Greenway and Neighborhood Trail Plan for more than a decade,” said West Creek Greenway Executive Director Derek Schafer. “It is the linkage between our 21-mile intercommunity recreational system through Independence, Seven Hills, Parma and Brooklyn Heights; the Cleveland Metroparks West Creek Reservation; and the Towpath.”

The project’s $3 million construction cost will be financed using federal and state grants as well as the City’s Selig Road Tax Increment Financing (TIF) Fund, and is expected to take a year to complete. 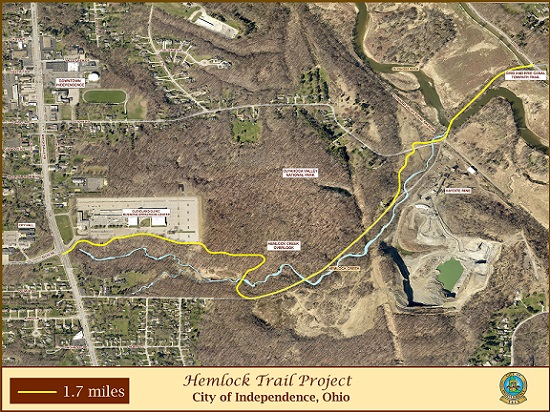 About Economic Development in the City of Independence

The City of Independence provides businesses with the access and connection needed to be successful in Northeast Ohio. A responsive community that offers amenities and services that many cities simply cannot equal, businesses that make Independence their home base can count on the City to help keep its business moving forward. Visit IndependenceOhio.org and YourIndependence.org for more information.