It’s how important our parks and trails are to our social, mental and physical health – and that connections to neighborhoods are an imperative asset to our communities.

Park and Trail connections to neighborhoods are an imperative asset to our communities.

We Need Your Help

We need your help to expand the West Creek Greenway and Trail System. In 2017, West Creek Conservancy acquired the former Parmadale campus, an approximate 80-acre parcel of land. However, a significant amount of demolition/reclamation is needed.

Your Donation is 100% Tax Deductible

The plan of a 25-mile natural public trail network, the West Creek Greenway, is an evolving vision of an interconnecting greenway trail linking multiple neighborhoods directly to the reservations and trails. This important work is supported largely by generous donors like you who contribute to our organization. Consider supporting us in our continuing efforts to establish the West Creek Greenway.

Additionally, on the southern end of the park, West Creek again with the City of Parma, has leveraged approximately $560,000 towards the construction of a reach of trail that will connect to Broadview Road and link to the Seven Hills Hike-Bike Trail portion of the Greenway!

The all-purpose trail is a key part of the 25- mile West Creek Greenway. The Greenway radiates from West Creek Valley in Parma, linking the Towpath Trail in the Cuyahoga Valley National Park to neighborhoods across seven communities. About 50,000 people live or work within a 15-minute walk of the proposed West Creek Greenway.

We need your support to raise the additional funds in order to complete this trail in 2022.

The 0.68 mile (3,632 feet) trail segment (shown below) would run along the north side of the Giant Eagle on Broadview Road on land controlled by West Creek Conservancy, and terminate near Camelot Road and the new WCC offices as part of this stage. It would tie into the Seven Hills Trail under the CEI Corridor at a controlled intersection and connecting with the Seven Hills Recreation Center, City Hall, and Hillside Junior High School. 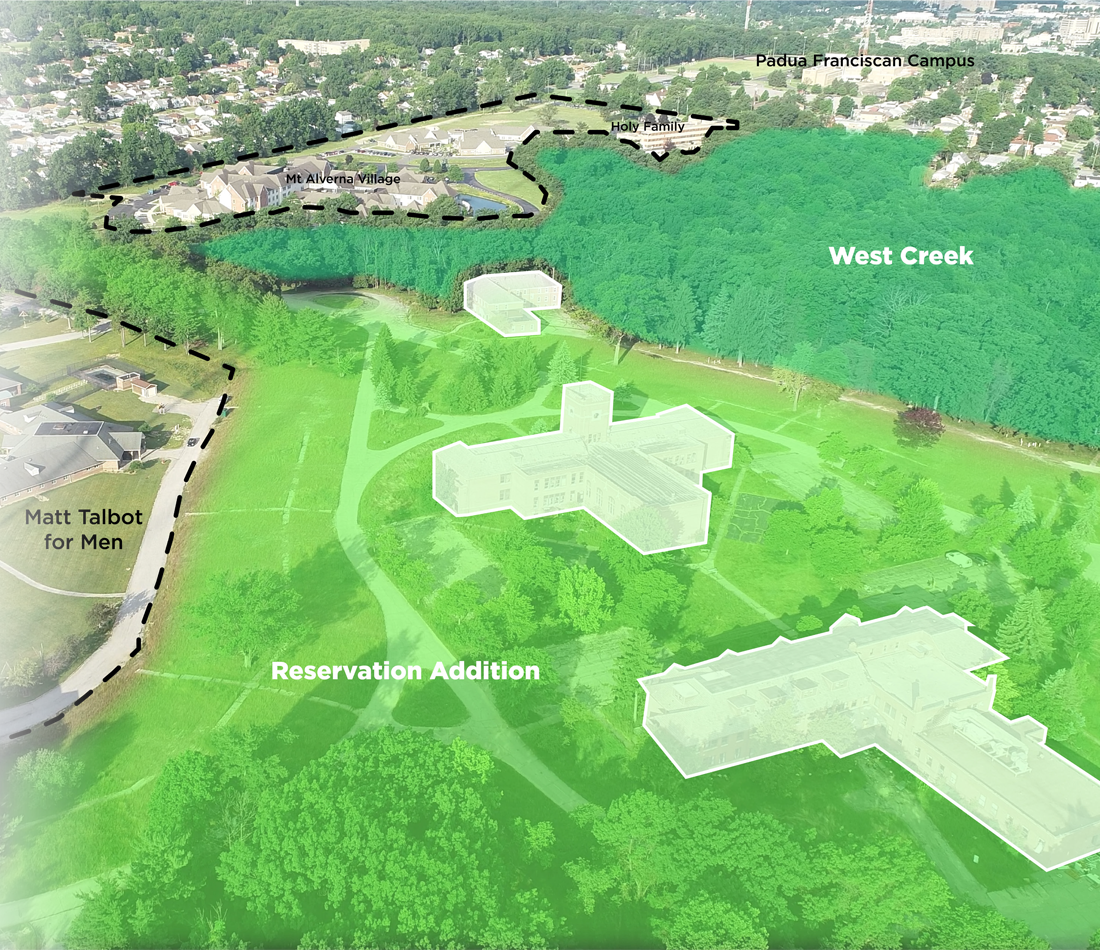 In 2017, in partnership with the City of Parma, the former Parmadale Campus was acquired with the goal of restoring and integrating the land into the West Creek Reservation. The former 80-acre campus is nearly cleaned up and ready to be activated as a public park land and added to the West Creek Reservation. With only 5.4% of public green space in a dense urban/suburban region, the addition to the park will create a more vibrant community, connect people to health and nature, and restore the habitat for cleaner air, land, and water.

We are seeking your support to complete the demolition and environmental clean- up of the site. As you can see from the image, there are three structures (outlined in white) remaining on the site which still need to be removed and are in a deteriorating condition due to a recent arson. This is important work which is largely supported by generous donors like you who contribute to our organization.

Investing in the Health of our Neighborhoods and Communities