Since 1999, Dave Vasarhelyi, founding Director of West Creek Preservation Committee (now West Creek Conservancy – WCC), had envisioned a trail extending east from Cleveland Metroparks West Creek Reservation to the Towpath Trail at Cuyahoga Valley National Park. He believed the trail would “become one of the best resources utilized by the community.”

WCC sought out sources of funding for this Seven Hills Trail. With leadership and support from former Seven Hills Councilman Scott Curtis, an initial grant was secured from the Northeast Ohio Areawide Coordinating Agency (NOACA) to fund the trail section extending east from Broadview Road, just north of Pleasant Valley Road. Councilman Curtis believed that because there were relatively few area sidewalks, the trail would provide additional recreational opportunities for residents.

Beginning beside Panera Bread, continuing past Seven Hills City Hall and Recreation Center, extending along the First Energy power line corridor past the soccer fields and behind Hillside Junior High School, and along the residential area to Cricket Lane—the one-mile trail route begins a convenient trail linkage to both West Creek Reservation and Cuyahoga Valley National Park for Seven Hills residents. Because most of the property was already owned by Seven Hills and First Energy, and with additional funding from NOACA, then City Engineer Mark Papke succeeded in completing the $828,000 project at a cost to Seven Hills of only $165,660.

Seven Hills City Council President Richard Del’Aquila, now the former Mayor, said, “This project could not have gone forward without the involvement and support of the West Creek Preservation Committee…

“Work on this trail linkage continues; West Creek Conservancy has been instrumental in securing additional funding for the Seven Hills Linkage from the State of Ohio’s Clean Ohio Greenspace, Clean Ohio Trails Fund, and the Ohio & Erie Canal Association so that the eastward extension of the West Creek Greenway can continue toward Cuyahoga Valley National Park and the Towpath Trail.”

Below is a map of the proposed trail in red. 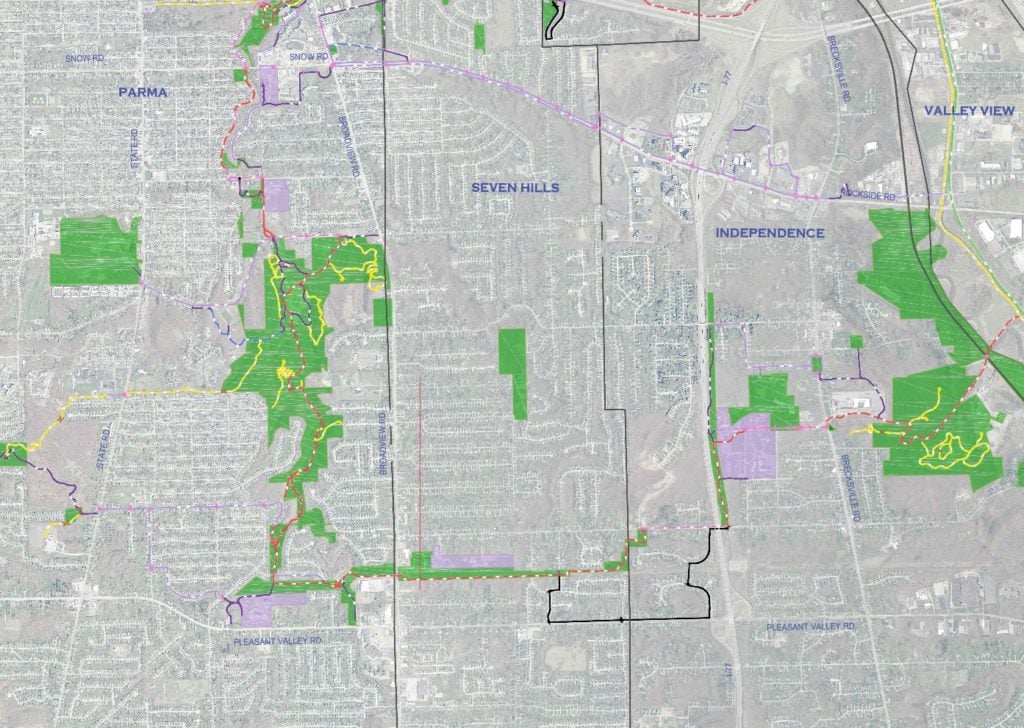